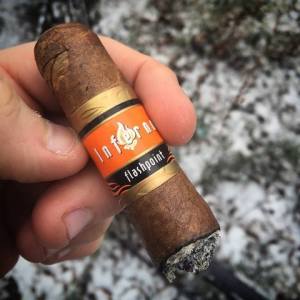 I smoke cigars… a lot of cigars. I will try any cigar out there and I make it a point not to get wrapped up in all the hype some of the major cigar brands beat down our throats. My thoughts are, If its a good cigar it will stand on its own and I really don’t give two shits if its the most popular cigar this year or not. So that being said, don’t be surprised if you have never seen or heard of a cigar I’m reviewing. Okay, lets get the cigar reviews started!

My first review is going to be Famous Smoke Shops best kept secret; The Inferno Flashpoint. At first glance I can see why most people would pass on this cigar. The band is nothing special being mainly orange with a gold band around the edges. The construction is good with small veins and a nice shiny Ecuadorian Sumatra wrapper. The cap is solid and cut very nicely. The cool drawl on the cigar didn’t provide much flavor at all but there was a hint of fresh rich tobacco and earth.

Fire It up!
Alright! Let’s give this mamma-jama a try. It lit very well without much effort and the first 3rd of the cigar, upon lighting and taking a couple puffs, produces an amazing amount of thick heavy smoke (which is a HUGE plus in my book) the flavor is a real punch in the face with white pepper, wood and rich, tangy tobacco. The ash is gray and has some tooth on it.

Mid-smoke and the white pepper and spice are still in full force but there is a nice tangy sweet flavor on the retro hale as well as a small amount of grassy note in the background. The burn is still razor sharp and the ash is a dark gray.

Final 3rd and no real change in flavor but I had to re-light it. The tang has increased slightly other then that no major change.

Final Verdict
I liked this cigar. I thought it preformed well and was a good full bodied smoke. If you’re a pepper junkie I would definitely give this a shot. Things I didn’t like about the cigar? The “tangy” flavor was nice at first and unique but it got a little overwhelming after a while. I also don’t like the price… I realize 7 dollars isn’t a lot of money but for a cigar this size I think it’s a little steep.

Would I smoke it again? Yes, it was a good full bodied smoke and if I was offered another I would gladly light it up. I’m giving the Inferno Flashpoint a 3.5 out of 5, it scored major points in my book for huge smoke output, great construction and being a pepper bomb. Unfortunately, it lost some points due to the 7 dollar price point, re-light and that weird tang flavor that just got overwhelming.

< Previous Next >
+ Add your own event Eventbrite
ReserectedPipes

A Site to Showcase Pipe Restoration

Tobacco and Pipe Reviews for the Common Smoker