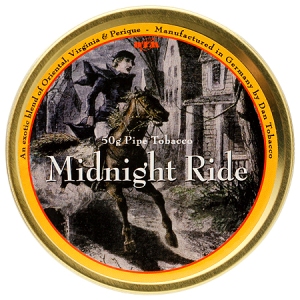 Before we begin, I have to get something off my chest… The idea that Midnight Ride is an English Blend doesn’t really make a lot of sense to me. Somehow, (in my head anyway) the idea that an English Blend is an “American History Mixture” from Dan Tobacco just doesn’t seem right. It’s like telling me you are making authentic Mexican food and then giving me a plate of spaghetti.  Honestly, if we asked Paul Revere he would probably be pissed that this tobacco is an English Blend because If we know nothing else from history it is that Mr. Revere thought the English sucked… I think he might have even used those exact words but don’t quote me on that.

Had it been up to me I would have blended this tobacco to be a non-aromatic, American blend with Burley and Kentucky and maybe some Perique mixed in to spice things up, but that’s just me. I suppose “historically” Paul could have smoked an “English” blend of tobacco but that doesn’t change the fact that in my head it doesn’t make a lot of sense… Anyway, I just had to get that out of the way.

The Freaking British Are Coming!
I purchased Midnight Ride at the local B&M a few months back for no other reason than I liked the art on the tin. I had never heard of the blend before and I had no idea what I was getting myself into. When I got home I did a little digging around on the internet to see what I could find about Midnight Ride before smoking it. According to the internet, (which is incredibly accurate 100% of the time) I learned that CAO was the original blender of the American Heritage Mixtures but have since discontinued them. Dan Tobacco has picked up the line and continued production using the same recipe as CAO. I resisted the urge to read any reviews I found on the blend before I had a chance to smoke a few bowls of it myself and I’m really glad that I did.

Again, I really liked the art on this tin so I’ll give the packaging high marks. The tin itself is pretty standard, folded tissue paper with a paper/cardboard cap just like every other tinned tobacco you buy. All good quality here so I’m not going to dwell on it any more than that. Once you break the seal on that tin however… hold on to your ass! Midnight Ride has a strong, and boy do I mean strong, Latakia scent. I can honestly say that this is probably one of the most intense tobaccos I have ever smelled. Sweet yet bitter with a hint of vinegar “sour” quality about it. Like most English blends this is really smoky, earthy and peaty but the peppery spice is what will really get you with this blend. Now is probably a good time to warn you that if you aren’t a lover of English blends, Latakia or Parique you are going to HATE this tobacco.

Moisture content in the tin was a little wet for me. I like to have my English blends be a little on the dry side, I think they smoke better that way but overall I was pleased with the humidity of the tobacco in the tin. I pulled out enough for a bowl full and let it dry for about five minutes before sampling the goods.

One if by land…
I have several pipes I dedicate to English tobaccos so my first choice was a small bowl, H.I.S. churchwarden because it smokes incredibly well. Packing and lighting this tobacco was no problem at all and as soon as I put a match to it I was in business. Once I tamped it down and got everything settled in I was good to go without any additional lighting required.

My first thought was, “Holy shit, this is some serious spice!” Maybe I’m just weird but every once in a while I smoke an English blend that has enough kick to it that I can’t be sure if I have tongue bite or if the spice is just that intense. This is one of those blends and for the better part of a half hour while I smoked it I was back and forth with this debate. Midnight Ride is strong but it’s also deceptive at the same time because the smoke is incredibly smooth and enjoyable. You are going to feel the Latakia and Parique in your mouth almost immediately but it mixes well with the other flavors of the tobacco. There is a nutty quality about this that is just under the surface but hiding somewhere among the leather and earthy flavors. If I could only use one word to describe this I would say Complex. Since this was my first bowl of Midnight Ride I tried to keep my notes simple knowing later I would really explore the qualities of this blend. So my first impression of this was basically… Holy Shit is this a good blend!

Two if by Sea…
I waited about a week before taking another Midnight Ride. I don’t want the first bowl to influence my opinion so I like to give myself a cooling off period between smokes. My second bowl was just as impressive as my first. Tons of flavors to be found and right away the intensity of the Latakia flooded my mouth. For the second sample I used a larger pipe hoping that this would give me more time to really explore Midnight Ride and pick out some things I missed the first time around. I wasn’t disappointed in my choice.

Almost immediately I noticed that the “intensity” of the Latakia and Parique in this blend had mellowed pretty quick with just a little aging (about a week). The first part of the bowl is where you really get the one-two punch of Latakia and Parique. It makes it hard to experience anything other than a smoky peppery flavor for a little while. Once you get past this however you will start to experience a more complex medley of flavors hidden under a mountain of spice. The natural flavor of tobacco will start to come through about mid bowl and it is a mild pleasant flavor that does a good job of toning down the strong spice in the beginning. As I have said, there is a hint of vinegar in this blend and it made me think of a smoky, sweet and sour barbeque sauce. The longer I smoke Midnight Ride the more I want to cook something on the grill because the flavor really is “meaty” and hearty. Mixed in there somewhere is also a hint of nutty, salty, earth tones that all complement each other incredibly well.

By the time you have worked your way to the bottom of the bowl you will be treated to a smooth blend of flavors that all seem to have stewed together remarkably well. The spicy sting of the Latakia and Parique will be much more subtle (or maybe my mouth just went numb) and the natural woody, smoky flavors of the tobacco finish off the bowl like a nice cup of coffee after a large meal. As an added bonus there is a rather noticeable nicotine kick to Midnight Ride for those of you who enjoy your vitamin N.

A Cry of Defiance, and Not of Fear…
Again, I’m going to say if you aren’t a fan of Latakia, Parique or English Blends in general you are probably going to want to stay far away from Midnight Ride. If you are looking for a bold, robust English blend with more going on than just Latakia in the flavor department this should be right in your wheelhouse. Overall Dan Tobacco has given us an excellent offering that I would honestly recommend over some of the “cult classic” English blends such as Nightcap (yeah I know, let the flaming begin!)

At the end of the day I don’t think I could smoke more than a bowl or two of Midnight Ride every few days. It is a powerhouse in the spice department and everything you smoke after this will probably seem pretty tame until you can cleanse your palate. I’ve enjoyed paring this with Samuel Smiths Oatmeal Stout or a glass of Jameson Whiskey after a big meal. I’ve also found that it’s a great, Last Smoke of the Day and I’ve enjoyed it late at night before heading off to bed.

About the only complaint I have is that it can be a little too much at times. There have been several occasions where I have wanted an English blend but passed it over and grabbed a tin of C&D’s Pirate Kake or Stokkebye’s English Luxury because I just didn’t want such a strong smoking blend.

I recently purchased a second tin of Midnight Ride to cellar for a while. Even just a little bit of time seems to really take a lot of the bite out of this and makes it an even more enjoyable smoke. I will let my second tin sit for a year or so before I break into it and see how the dynamic of the tobacco has changed. Until then however I will just take an occasional Midnight Ride and try to hold on. 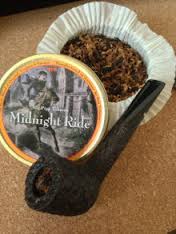 < Previous Next >
+ Add your own event Eventbrite
ReserectedPipes

A Site to Showcase Pipe Restoration

Tobacco and Pipe Reviews for the Common Smoker